To commemorate Canada Day, I decided it would be useful to clear up some common myths people have about Canada and its culture. I thought it might be especially helpful here at The Skwib, since many of its readers come from other parts of the world. You may want to read Part One, about Canadian history, first:

If you are familiar with Canada, you may have heard something about hockey — or ice hockey, as it is known in countries where other, sissified forms of hockey are more popular. Hockey is quite possibly the most important thing in Canadian culture. Did you know that most Canadians emerge from the womb clutching a tiny hockey stick? Did you also know that infants who do not have a hockey stick when they are born are given one by the National Hockey Commission? It’s true. (Though quite often the Canadian babies born without hockey sticks must have it duct-taped to their tiny fists.) Hockey was invented by Canada’s first PM, John A. “The Madman” Macdonald and his Association of Really Ripped Gentlemen (ARRG) in 1847 (the same year the Canadian parliament was built in Ottawa). Hockey permeates Canadian society the way that guns permeate US culture. When there is no ice to play on, Canadians make do with roads, sidewalks and abandoned tennis courts to play their favorite game. There are probably about 29-million people playing hockey right now in Canada. (The other four million are either too infirm or too drunk to play, or they are part of the small percentage of selfless Canadians who keep our various hockey-supporting infrastructures serviced, including the universal hockey injury health service, the power grid, and of course, the lumberjacks who chop down the trees we use in the creation of hockey sticks.)

Almost as important as hockey, Timmys, or Tim Hortons, is Canada’s national coffee chain. (It may be no surprise to learn that Tim Horton was a legendary hockey star, capable of decapitating his opponents with one slash of his razor-sharp hockey stick.) Timmys is best known for its highly addictive coffee, made from the distilled sweat of NHL hockey players, ultra-caffeine, phenylcyclohexylpiperidine (rocket fuel), and one supposes some form of coffee bean, though the dark coloring may be provided by some kind of cocaine-based food dye. Timmys coffee is powerful enough to wake even a thoroughly hung-over hockey dad at 4 am, as he attempts to deliver his hockey-addled progeny to a 5 am practice.

You may not realize this, but one of Canada’s major exports is international stars. In fact, fully 63.2% of our Gross Domestic Product is the result of remittances from our international stars. What stars am I talking about? Well, the Department of International Entertainer Breeding has been most successful at creating three kinds of super stars:

I would like to take this opportunity to apologize for this, but really, what choice do we have? We would go broke without them. Though we really are very, very sorry about Celine.

Many of you may have heard of the Canadian Broadcasting Corporation, which is purportedly Canada’s national broadcaster, running services in both English and French; the CBC has television and radio stations across the country. This, is, of course, a front. In fact, the CBC are highly trained cadre of scientists, weapon-specialists, and blade-wielding warriors who keep Canada safe from another outbreak of zombies. (This is always a danger, particularly in the summer months after the NHL hockey season is over, when Canadian men, in particular, are prone to fits of zombie-ism.) Without the brave and tireless work of the CBC, Canada would have long been overrun by zombies. Even so, some taxpayers think it would be nice not to have to pay for CBC TV.

William Shatner is a national treasure, so he gets his own category. It is just a matter of time until we have a National Holiday named after him. (Personally, I think we should have some kind of break in February.)

Here is some classic “stylings” of Bill, performing Rocketman:

And here is Bill’s send up of the I AM CANADIAN rant: 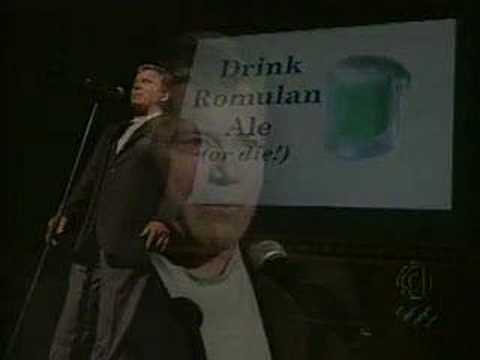 Note: we may have different interpretations of what the word “indisputable” means.

Ten indisputable facts about Canada
(Part One: History)
Nude Clanking Down a Staircase