Alltop groks all forms of humor!

Canada’s failure to win a seat at the UN Security Council is a fine example. When it became apparent that we were going to be HORRIBLE embarrassed in this enterprise, Canada withdrew. Conservatives quickly blamed our failure on Michael Ignatieff’s bone-headed criticism of them earlier this week.

Had nothing to do with our foreign policy of the past four years, nor with our ham-fisted lobbying efforts. Of course, I’m sure Iggy WISHES he had that kind of power and influence.

I gave my baby for Alltop to kiss, and it bit him on the head!

TORONTO (The Skwib) — They may wear toques instead of berets and scarf down high-octane Tim Horton’s coffee instead of smoking Turkish cigarettes, but a new poll shows 79 percent of Canadians are in as serious an existential crisis as most French novelists about to write a bleak philosophical roman ennui.

“A bit of uncertainty is healthy, but a crippling lack of meaning and purpose can really screw up your political system,” says Martin Angst, Director of the Void Institute for Philosophical Research.

According to the survey, a whopping 72 percent of Canadians who are undecided or who have said they will not vote in the next federal election have said they “don’t see the point”. A further six percent say the “meaningless” of the vote drives them to despair. One percent say they are heavy industrial magnets. The latter group are likely not existentialists, but absurdists.

“It is clear from these poll results that Canadians must accept that existence is prior to essence,” says Angst. “In other words, if they want meaningful choices they will have to make the choices themselves.”

And if Canadians don’t like the candidates available on the ballot?

Alltop and humor-blogs.com are both filled with a sense of despair.

Something was rotten within the Thunka Glunka Clan, and the putrid stench swirled around the vortex that was Thag.

Thag was a competent hunter, a low-key leader, once a loving partner (before his mate Onga had left him for the clan’s shaman, Weasel-Scratch-Face-Brother) and a burgeoning artist.

It was Thag’s art that had caused the stench storm; in particular, a satirical painting showing how Dubyag — the leader imposed on the tribe’s hunters — had screwed the mammoth, so to speak. Thag just didn’t blame Dubyag, who was ambitious beyond his abilities. He blamed Bushenor, an influential Elder who had foisted the incompetent Dubyag on the hunters.

It had been a political decision that had caused the hunters dearly, and would, in turn, cause much hardship over the coming winter for the whole tribe. Some would die for lack of food. Just like the hunters who had met their demise in a poorly conceived hunt of a rutting (and enraged) wooly mammoth.

Since Thag’s painting had raised the issue, he was asked by the surviving hunters to speak to the Elders before a gathering of the tribe. Thag had reluctantly agreed, but he was nervous. Never before had he spoken to so many at once:

“Thag not like being center attraction,” he began, “but Thag speak must!”

The Elders were silent, though others of the Thunka Grunka Clan grumbled in the background.

“Elders make Dubyag leader of hunters. Dubyag not wise. Not Dubyag’s fault — him kicked in head by wooly rhino. Him bad leader of hunters. Some die. Mrogak learn fly when mammoth throw him from cliff. Not learn land. New Thunka Grunka with strange hairdo, Fonzag, get turned to jelly. Bad. Many hunters hurt. No meat to cure for winter. Many be hungry. Bad.”

Words were failing Thag quite seriously, but when he saw the others nodding their head — even some of the Elders — he plunged on: “all because Bushenor want me to take back Onga. All because phallus-with-ears shaman not want her any more. Bad. Not Thunka Grunka way. Thunka Grunka be not selfish!”

More grunting in agreement. It was true; for the clan to survive, everyone had to play their part. Everyone had to cooperate and sometimes, put their personal wants aside.

“Thag take Onga back, but only if Elders make him leader hunters. Only if Bushenor leave clan.”

Dead silence. It was a serious demand, for Bushenor was an old man. He would not live very long outside of the clan. But he had caused two hunters to die, and most of the others to be injured beyond the point where they could hunt big game. Many nodded when they saw the wisdom of punishing Bushenor, not his incompetent son, Dubyag.

And not a few took note that Thag did not ask for the shaman to leave, though much of this originated with his own selfishness around stealing Onga from Thag.

The Elders argued into the night, but finally agreed. Bushenor would leave the clan. But Thag would have to take Onga back, for the good of the tribe. And he would take Bushenor’s place on the council.

Both of which displeased Thag, but he acquiesced: “sometimes Thag have take one for team.”

Scientific explanation of why people need a push to cooperate. And these folks always play well with others. Originally published in 2006.

Thag had made his decision — he was not taking Onga back, even if the shaman, Weasel-Scratch-Face-Brother, insisted. Thag could see why Weasel wanted him to take her back; Onga was driving the shaman crazy.

The flesh-pole with ears shaman insisted. And Thag refused.

Weasel then lobbied Onga’s father, Bushenior to force Thag to take her back. The Elder was fairly influential within the tribe, and he told Thag that if he did not take Onga back, he would install his son, Dubyag, as the new leader of the hunters over Thag.

“Maybe,” Bushenior said, “but he’s my son, and Onga is my daughter. I can convince the other Elders that I am right.”

“I don’t care if it’s bad for the hunters. It will make you do what I want,” Bushenior said.

“Only in the short term. You will buckle under.”

It ran against every instinct he had, but Thag said: “Elder can go have grunties with cave lion.”

And so Thag was relieved of his position as lead hunter, but not after inconsiderable arm twisting by Onga’s father. As Thag had predicted, the first expedition led by Dubyag was a disaster.

In a classic case of over-ambition, the brain-damaged Dubyag convinced the other hunters they should take down a big male mammoth. During rutting season. Fonzag, the newly adopted Thunka Grunka and mate to the nubile Vunga (half-daughter of the shaman), was well-liked amongst the hunters, despite his adoptive status and unusual approach to hair grooming (he spiked it with tree resin gel); Fonzag was himself almost turned into a kind of gel by the back left foot of the enraged mammoth, escaping only because of his diminutive size. His buddy, Malphag, was not quite as lucky, as the mammoth sat on him.

Mrogak, the brother of Mrog (who had been killed by a cave lion the year before), discovered the wonders of flight, as the mammoth picked him up with his trunk, and flung him from the edge of the cliff they had hoped to drive the mammoth over. Mrogak, unfortunately, was not as excited by the wonders of landing.

Other hunters suffered some broken bones, bruises, and Bushenior’s other idiot son, Bejag, somehow managed to stab himself with his own spear. He would live. In shame.

Dubyag was leading from the rear, and was the only hunter not hurt, except for Thag, who had forseen the disaster, and got behind a rock big enough to be protected from the rampaging mammoth. (At least a few of the other hunters had followed his example.)

When they finally got the wounded back to the cave, and the dead buried, Thag did his first painting of humans.

It showed a wooly mammoth copulating with Dubyag, while his father watched, the Elder’s head just barely visible over the enormous pile of droppings he was buried under.

I think I may have to start watching Letterman on a regular basis again. Apparently last night, Letterman finally had McCain on his show and actually got in a few shots about the whole “palling around with terrorists” thing. (After he’d forced McCain into an uncomfortable mea culpa for McCain blowing him off a few weeks ago.) According to Gawker:

You can see the video at Gawker. And if you want more commentary, check out Roger Caitlin’s column.

Now, if you’re thinking these tenuous connections to people from the past are all codswallop, you may not be alone. You may be thinking, “what the hell is codswallop, anyway?” Well, luckily there is a certain Russian bimbo who has the chops to explain the etymology to us: 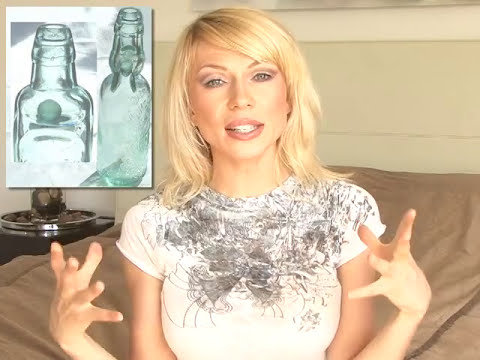 The etymology clips are much easier to take than the segments where she explains how to pronounce words.

Alltop and humor-blogs.com also have trouble with the “r”, dahling.