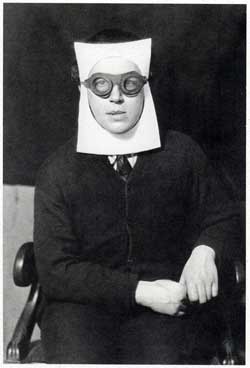 Tolbert Whistlebaum had a deep and abiding love for the English language, which is why he took a doctorate at Oxfjord University, concentrating on Naughty Victorian Literature.

His scholarship was insufficient to cover his tuition and his love affair with first edition copies of Richard Burton’s translation of the Kama Sutra (eventually they became unreadable), so he took on a copy-editing job with the marketing division of Gargantuan Enterprises. His boss was a lovely and exciting woman, but she did nothing to stop the linguistic excrescences that his co-workers produced on a daily basis.

He is pictured here, shortly before he did a little “rightsizing” at the company through a new “aggressive interface paradigm.”

Everyone agreed — including the judge — that his presentation was quite “impactful”.

Alltop is constantly monetizing their outside-the-box thinking, and moving forward too. Originally published, July 2007, and appears in the collection, Pirate Therapy and Other Cures.