This is a typical Canadian,
voting without the benefits
of time travel.

First of all, thank you for doing this job! I imagine it is somewhat of a thankless task, and I for one appreciate being able to vote, even though Stephen Harper tells me I shouldn’t want to. I certainly don’t begrudge you the hard-earned tax dollars that helps pay your salaries. (Unlike the loonies that got flushed for the G-20 summit.)

I understand that as “an independent, non-partisan agency that reports directly to Parliament” you can’t do much about the elections act, and the fact that a portion of the act prevents the “premature transmission” of election results across time zones. Obviously, this “transmission” could be done by CTV, CBC, hack newspapers, and, of course, individuals using Twitter. So, your threat that anyone announcing results too early could be fined $25,000 and suffer a thorough noodle-lashing is perfectly reasonable. You’re just upholding the law.

A thought occurs: a thorough implementation of this policy may be an excellent way to deal with the massive budget deficit the previous (Conservative) government has left us. In fact, if only 1.2 million Canadians say something about the election results before all the polls are closed, that should cover the $30 billion deficit. (16 million Canadians are on Facebook, more than 300,000 are on Twitter – and many of those will be repeat retweeting offenders – this seems like a reasonable proposition.)

The answer to this issue is so obvious. I’m surprised it evaded you.

All you need to do is pick a Canadian Standard Time. Voila. If we all live in the same time zone, there will be no likelihood of Canadians (innocent and not-so) contravening the act and using their social media to tell their distant relatives and friends what is happening where they live. Granted, it may prove inconvenient to have the sun rise at 5 am in Halifax and 10 am in Vancouver, but we all must learn to make sacrifices. (Except in Toronto. Never there.)

Another (more radical) solution may require some research. My understanding is that time travel is theoretically possible. Perhaps we could somehow move populations through time so that no-one has to experience the horror of knowing what other parts of the country have done before them. Obviously, there will be some expense to this. But we can make it affordable by moving populations based on size and location. Once again, this proposal will mean that nothing will interfere with people living in Toronto – or Montreal and Ottawa (also important) – and their daily activities. Besides, people who live on the coasts should be willing to work with the inconvenience, because they’ve got all those positive ions helping them keep healthy and be happy anyway.

A third (extremely radical) idea, is that you could only release the poll results once all the votes have been counted. This would mean no time travel, nor subjugating the entire country to the diurnal dictates of one time zone (Toronto-time, we could call it), but it may work. You would have to count all the votes, and only release them to the media (and slack-jawed Facebook users, with and without gnome helpers) when ALL the results are in.

Of course, that would mean that people in Toronto would have to go to bed before they knew the results of the election.

Watch this, and you’ll be ready to start producing news items for the BBC. 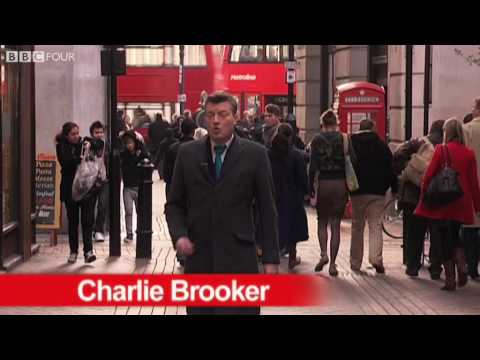 Or try YouTube if the embeddy thing doesn’t wipe. I wanted to post this earlier, but it took a while to find the clip, but here it is, and sorry about the ad:

This is a fun and page-turning read about eugenics, institutionalized child abuse, and genocide.

Humanity is at war with a distance race of aliens (called “Buggers”) and for some reason, the adults are unable to discover the best way to fight this implacable ant-like enemy. (Apparently, Boric Acid doesn’t work.)

What it really requires is the sense of wonder and innocence that only a child can have, and so, the people in charge of Earth’s governments start a breeding program to turn out kids designed to be excellent space warriors.

The children are all tagged so the authorities can monitor all their thoughts and movements, while they are being evaluated for service in the International Fleet. (A device that is similar to an iPhone, but a little smaller, and you can’t download your own apps to it.) After he is un-tagged, a young Ender Wiggin is attacked by bullies, and he kills one of them, so that the bullies will no longer bother him. The IF realizes it has made a horrible mistake. This is just the kind of ruthless logic they need in their war.

The rest of the novel follows Ender’s rise through the ranks at Battle School and Command School, a marginally creepy shower scene, and eventually, the set up for an excellent sequel, The Speaker for the Dead.

It is worth noting that an anagram of Ender Wiggin is “Ending Grew I.”

Not to be confused with the movie, the book version of The Fellowship of the Ring includes several scenes with the mysterious, and quite possibly brain damaged, Tom Bombadil.

On the positive side, Tom saves the hapless hobbits twice: first from Old Man Willow, an ancient and malevolent tree that lives on a toxic mix of Highballs and lost Halflings; and then, from a number of barrow-wights, evil soul-sucking undead creatures, not to be confused with Barry Wights, who are excellent, soulful (and unfortunately regular dead) singers of sexy songs.

Speaking of song, Tom spends much of his time in a whimsical and poetic dreamscape of his own construction, singing as he passes blithely through the Old Wood. Tolkien tells us that he dresses in yellow boots and a blue jacket, leaving one to wonder if the author just forgot to mention if Tom was wearing pants, or if he is simply glossing over the lack of pants. I suspect that latter, because he does tell us that Tom has a long brown beard, bright blue eyes, and an extremely red face.

Red face? Is Tolkien suggesting Tom is an alcoholic? It’s hard to say. He acts kind of inebriated, given his propensity to speak in the bizarre poetry of a metre that is at best unconventional, and at worst, deranged. He also likes to talk about himself in the third person. This does not seem to annoy his wife, Goldberry. (Who may or may not be the spirit of the river Withywindle, but who is definitely some kind of saint for putting up with this narcissistic and enigmatic half-wit.)

Bombadil is totally unaffected by the Ring, and he demonstrates this by doing a little sleight-of-hand, taking the ring from Frodo, and making it disappear in the air. (I suspect he palms it, but again, Tolkien does not tell us directly.) The One Ring doesn’t make him invisible, and he doesn’t seem to be influenced by Sauron through it.

So why don’t they just keep the ring hidden with Tom? It would have saved Frodo a painful stab-wound, massive existential angst, and having to endure Sam’s repeated attempts at innuendo, by suggesting that he could really go for a nice bit of “cony stew.”

Apart from the fact, that, hey, no trilogy, Gandalf suggests that because Tom is unaffected by the ring, he would probably not consider it important enough to protect. That’s a nice way of saying he’s a flighty (possibly pantsless) wanker.

Alltop is the best pantsless humor aggregator on the web.