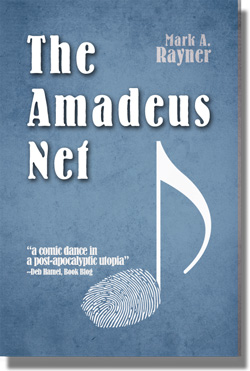 Wolfgang Amadeus Mozart is alive and in love, living in the world’s first sentient city, Ipolis. Lucky for both of them, nobody knows, but how long can it stay that way?

Set in 2028, The Amadeus Net is a satire that examines life, love and the nature of art in a world struggling to recover from a cataclysmic asteroid strike and human stupidity…

“a story that makes you think and laugh … a hidden treasure”
~Corey Redekop, Author of Shelf Monkey

“… pokes fun at a variety of modern trends and foibles, and … does so wittily and entertainingly.”
~Donald D’Ammassa, Author of Narcissus

Wolfgang Amadeus Mozart walks into the gender reassignment clinic, determined to have his “sprouter” snipped off. So begins The Amadeus Net, a satirical novel that explores art, love, and identity at the end of the world.

The year is 2028. For more than two centuries, the one-time wunderkind has kept his existence secret while he tried to understand his immortality. Living in style through funds raised by selling “lost” Mozart works, he has also helped to create Ipolis, a utopian city-state, after the cataclysmic Shudder, a global disaster caused by an asteroid strike in 2015.

But a few complications mar Mozart’s perfect world. The woman he loves is a lesbian, which, paradoxically, makes him forget about his sex-change plans. The world’s greatest reporter knows he’s still alive and will stop at nothing to expose him. The stakes are higher than he knows, because if the reporter finds him, so will the spy planning to sell Mozart’s DNA to the highest bidder. Oh, and, by the way, the world might end in seven days.

Get the book directly from ENC Press

This site uses Akismet to reduce spam. Learn how your comment data is processed.