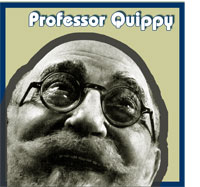 Why is this 10-pound bruiser a turd in the continental-drift punchbowl?

Well, not only was it a beach-ball sized frog with a giant Pac-man-like maw lined with teeth, armor, an aggressive attitude and laser beams strapped to its frickin’ head, its claws were clutching a tiny sign that said, “Brazil or Bust”. (Okay, I made most of that up. Seriously, how do they know anything this from a fossil? Extrapolation from similar species in South America, as seen in the pic to the right.) 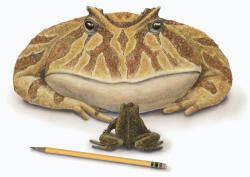 Its existence in Madagascar 80 million years ago suggests that the island was connected to South America, and the Indian subcontinent well into the Cretaceous period. (Known for its large, lawyer-eating lizards.)

Of course, that’s what the paleobiogeographical scientists say. The paleogeographical people say they’re making it all up.

By the way, the name of the frog is Beelzebufo short for “in your face paleogeographers, boo-ya!” (Would you believe Beelzebub Bullfrog.) No word yet if it had the power to hypnotize it’s prey, which may have included young (tasty) dinosaurs.

Other hellish amphibians can be found here. More about this story at the New Scientist. Artist: Luci Betti-Nash.