Flush with the success of their most recent Mars mission, NASA is now planning on taking humans to the Red Planet. And they’re starting by collecting urine. Roughly eight gallons a day.

This massive pee-hoard will help contractors test a new toilet for the Orion space exploration vehicle. (Which is going to the moon, not Mars, but you have to break up big jobs into little dribs and drabs.) Apparently, the copious amount of wee-wee is needed because it is difficult to “fake” urine. (Talk to my ex-wife, she could fake anything.)

The request for massive amounts of piddles and widdles was sent in a memo to the workers at the Johnson Space Center, and was not intended for dispersal to the entire globe via the Internet, but the Genie is out of the bottle, so to speak.

So far, NASA officials have concentrated (not too much, we hope, and we certainly hope they weren’t eating asparagus), on why they need so much for their testing, in hopes that we will not be able to see through their cloudy, noxious yellow schemes.

You see, the flight to Mars will require the astronauts to be completely self-sufficient, and part of that means they will not be able to waste anything. (Yes, pun intended.) That will include, you guessed it, pee. Somehow, they’re going to have to figure out a way to recycle everything they can, so no doubt there will be more calls for large numbers of NASA workers to “see a man about a horse”, while they test those systems too. So all you would-be astronauts, keep in mind that your journey to Mars will include about eight months of drinking your own (and that of your capsule-mate’s) … uh, recycled liquid wastes.

So you see, Grimshaw was only ahead of his time. [I could not find the YouTube clip of the Python Sketch, so the script is below.]

And if you’re dying to know how one powder’s one’s nose in space, Canadian astronaut, Chris Hadfield tells all (and I guarantee you’re never going to look at shooting stars the same way after you watch this): 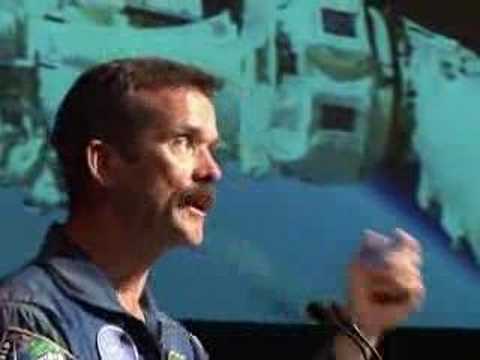 Other funny blog posts are at humor-blogs and alltop. Sky report here. And now for something completely different:

A hospital lobby. A line of people are being ushered through. A sign says ‘Blood Donors’ with an arrow in the direction they’re all going. Mr Samson (John Cleese) is in a white coat.

Donor: Oh thank you very much (joins the line).

Samson: No. We have no call for it. We’ve quite enough of it without volunteers coming in here donating it.

Samson: No, we don’t want a specimen. We either want your blood or nothing.

Grimshaw: I’ll give you some blood if you’ll give me…

Grimshaw: A thing to do some urine in.

Samson: No, no, just go away please.

Grimshaw: Anyway, I don’t want to give you any blood.

Samson: Fine, well you don’t have to, you see, just go away.

Grimshaw: Can I give you some spit?

Samson: No, look, this is a blood bank – all we want is blood.

Grimshaw: All right, I’ll give you some blood. He holds out a jar full of blood.

Samson: Where did you get that?

Samson: What group is it?

Grimshaw: What groups are there?

Grimshaw: It’s A. Samson (sniffing the blood) Wait a moment. It’s mine. This blood is mine! What are you doing with it?

Grimshaw: I found it.

Samson: You found it? You stole it out of my body, didn’t you?

Samson: No wonder I’m feeling off-colour. (he starts to drink the blood; Grimshaw grabs the bottle)

Grimshaw: Give that back. It’s mine.

Samson: It is not yours. You stole it.

Samson: Give it back to me.

Grimshaw: All right. But only if I can give urine.

Samson: …Get in the queue.

4 Responses to Professor Quippy: NASA is taking the piss