The new arms weren’t as much fun as I hoped they’d be, but they were sure useful during the crisis.

As you know I’m not really into the bodmod community, but I’d always thought it would be cool to be able to swing from tree to tree, the way we saw the Reclaimed Gibbons do in the preserve, when we were in high school. Yeah, the one down in Souwesto, near the ruins of Toronto, remember? That was a great trip.

I got the new arms a few weeks before it started. They weren’t actual Gibbon arms, of course, but a beautiful bit of work by a friend of mine, who dabbles in bio-enhancement. She mostly works with nano, but I keep telling her she has a real flare for the genetic arts too, so she did a combination. The plan was to spend my vacation swinging with my simian friends in Souwesto. Tree swinging that is.

Of course I got the hair on them; I’m not totally fake!

My musculature had just finished healing — even with the latest developments, flesh bodies adapt slowly to nano — but I don’t need to tell you that do I? Duh. I sometimes forget that we’re all real time now, even you guys on Big Red.

Anyway, the worst happened. Multiple eruptions, right when we were at our peek seeding of the atmosphere. Temps dropped. The snow started falling. Piling up. And bam. Ice age.

In miniature, anyway. Of course, it couldn’t last, but the damage. Wiped out my Gibbon buddies in Souwesto. And nearly got all of us here in Nunavut too.

But these babies were awesome. You know how much easier it is to ski and snowshoe if your arms can provide half the power? The hair was useful too — an extra layer for warmth. And I’ve been told they’re awesome in zero-G, so I think I’ll keep them until after I visit you.

Though I’m sure it still won’t be as weird as your green skin, man. That I have to see with my own eyes.

Alltop swings with the yuks. Photo by Stuck in Customs.

It always does seem a bit harsh that the step dads die such horrible deaths in disaster movies. They should do some sequels showing how the “heroes” of the movies return to their douchebaggery, ignoring their children, drinking too much bathtup gin (assuming there is the technology available) and cheating on their wives/girlfriends with attractive post-apocalyptic CHUDS. 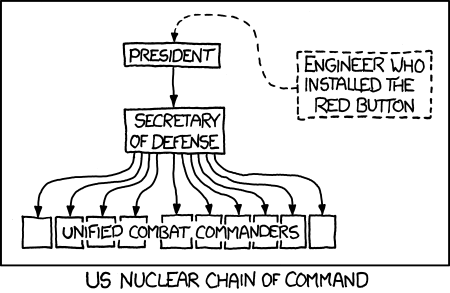 This seems like an appropriate cartoon for today. Looking forward to the Tribulation!

Alltop is a trial too.

Writer’s note: The username links do not work, but others do. Some readers may prefer to start this short story at the chronological beginning, but I recommend starting here:

LandingPartyONE Displeased we did not demolish Twitter servers instead of using them. Activate sterilization protocol.
less than 5 seconds ago from TweeterProbe

Happybriefs I’ve destroyed all them in my house with a fern spritzer and my son’s SuperSoaker. I know, it’s stupid, but water does it! #pocylpse
less than 5 seconds ago from web

Bovatime The goats have thrown in with them.
We’re fucked.
less than 5 seconds ago from TractorTweet

Beanlover They’re all devastated by water — robots, monkeys, zombie-mushroom-people. All of them. RT, RT, RT! #pocylpse.
less than 5 seconds ago from web

SeePeeOh Thank god I got that RT. Flying monkeys are carrying blasters! Laser beams. Whatever. RT! Follow the discussion, people! #pocylpse.
less than 5 seconds ago from mobile web

ThumperB I’ve decided there is no God.
This is bullshit!
less than 10 seconds ago from Twirl

UberPR Flying monkeys are also carrying some kind of beam weapon! #pocylpse Please RT.
less than 10 seconds ago from web

HappybriefsBasement no good. Mushroom things can dig man! Water is their kryptonite though. Isn’t that gay? #pocylpse Please RT.
less than 10 seconds ago from web

Chknlady Managed to get away from shroomers — kind of like zombies, eh? In stairwell with only one bar. Just in case, I love you Dan!
less than 10 seconds ago from mobile web

Ballbearing12 Their skulls crush so easily.
Sweet.
less than 20 seconds ago from TweeterProbe

Captnjojo @CreamGirl It means the apocalypse. More of a war of the world scenario, really. Suppose fire from landing ships is #biblical. #pocylpse
less than 20 seconds ago from web

50sMama Why there are flying monkeys stuck in my chimney? The little creatures outside really do look like mushrooms. They’ve eaten my cat.
less than 20 seconds ago from web

less than 20 seconds ago from TweeterProbe

Bovatime Goats are negotiating with mushroom people . Cows making a run for it. Both udderly disgraceful.
less than 20 seconds ago from TractorTweet

ThumperB This sucks. Clearly, I missed the Rapture. I think the mushroom people are devils. #pocylpse
less than 20 seconds ago from Twirl

less than 20 seconds ago from web

less than 30 seconds from mobile web

Chknlady Just got up and going for jog.

1 minute ago from mobile web

Happygrrl > @Blobbob You’re OUTING someone at the End of the World? You’re so UNFOLLOWED. #pocylpse
2 minutes ago from TweetDeck

SeePeeOh @DrTundra No. Monkeys. I don’t think you needed to take peyote today. Plus the parking lot is crawling with mushroom people. We’re doomed!
2 minutes ago from mobile web

Blobbob The whole house is shaking. The monkey screaming! I think this is it. I’ve been dying to let everyone know Darren is gay. #pocylpse
2 minutes ago from web

Captnjojo @BolandOR I like the idea of occupying a WalMart. Kind of like Born in the Great WalMart Stand. Story here: http://bit.ly/cImX
2 minutes ago from web

HappyBriefs Won’t be back online for a while. Going to basement! #pocylpse
3 minutes ago from TweetDeck

DrTundra Should the sky be that color? What is that flying through the air? Should I have drunk that peyote shake this morning? #pocylpse
3 minutes ago from web

ThumperB @BolandOR You shouldn’t make fun of the Bible’s prophecies. The Word is real. The Whore is among us!
4 minutes ago from Twirl

50sMoma I think one of those things just attacked the postal worker. Isn’t a shame we can’t say PostMAN anymore?
4 minutes ago from web

DonnaVinci @50sMoma What kind of mushrooms do you use in muffins? Shitaki?
4 minutes ago from web

50sMoma Baking muffins and watching strange things run down the street. Look like mushrooms with legs.
5 minutes ago from web

LandingPartyONE Unleash ground forces.
Keep your fingers away from the cages!
5 minutes ago from TweeterProbe

BolandOR @Beteeee Seriously, a #monkey# apocalypse. What about something #Biblical, like frogs?
6 minutes ago from web

Handbaglady Just bought the most darling handbag at Saks.

6 minutes ago from mobile web

6 minutes ago from TweetDeck.

Beanlover What’s the hashtag for this?

6 minutes ago from web

HappybriefsNot an earthquake. But there’s something weird going on out there. Look at the sky!
7 minutes ago from Tweetdeck

LandingPartyONE It is time to release aero-forces. Ensure their “Lasers” are armed.
8 minutes ago from TweeterProbe

Beteeee@BolandOR I am getting SO tired of blithe references to the zombie apocalypse. What if it’s not zombies? What if it’s robots, or monkeys?
7 minutes ago from web

BolandOR Excellent article about how to survive coming zombie #apocalypse. http://bit.ly/SyzBo
8 minutes ago from mobile web

Penguinlover Hi everyone. Just got up and gonna get me some brain food. And coffee!
8 minutes ago from web

LandingPartyONE Set up account.
We are happy.
8 minutes ago from web

UberPR @Happbriefs Yeah, we got it here in Manhattan too. Earthquake?
9 minutes ago from web

Happybriefs Did anyone else in Schenectady feel that shudder? It was like an earthquake or something.
9 minutes ago from Tweetdeck

Bovatime Cows are acting weird.
Goats too.
10 minutes ago from TractorTweet

Alltop would probably side with the goats. You can follow the author at http://twitter.com/markarayner. Thanks to Bolandtor and Bete for some of the icons. Originally posted on April 23, 2009, but I wanted to post it again because I’m teaching some journalists-in-training how to use Twitter today.

How will Twitter end the world? There are six competing theories. Perhaps one day religious scholars, apocalypse researchers and other gloomy intellectuals may agree which of these theories is correct, or maybe some genius will provide a Unified End Theory of Twitter. Until that happy day, we will have to simply forearm ourselves with knowledge of these theories, and grimly soldier on.

This is a re-imagining of the popular (and much-hoped for) Christian End of Days. In this cosmological terminal point, the Son of God will return to our planet and use Twitter to inform us of who has been naughty and who has been nice. Anyone who retweets Christ will be saved, and naturally, he expects you to follow him back too. Failure to do so will prevent you from enjoying the Rapture, which means you’ll have to endure the painful Un-Twittering process. (Known in other Christian eschatology as the Tribulation.)

This theory posits a dystopian world-government ruled by a troika of control-freaks using Twitter to watch our every move and control our very thoughts. I don’t personally believe this end theory for one moment, but it is presented here in the interests of accuracy. These theorists may be thinking of Facebook, not Twitter.

Twitter will eventually become so overrun with bots following one another that human communication will be rendered impossible. Some even posit that these bots will consume all of the Earth’s resources so they can inform one another of viagra and cialis sales. Humans will be rendered obsolete, except as a kind of biological battery and sex drug storage device.

There can be only one! Each Twitter user has the potential to become not only immortal, but omniscient as well. The only catch? You have to cut off the heads of every other Twitter user. So clearly, the number of followers you have doesn’t really matter, and in fact, may be kind of awkward. On the plus side, “unfollowing” could be a bit more satisfying.

A terrifying prospect — exponentially rising populations, global warming, water shortages, and growing costs of fossil fuels will not only cause massive food shortages, but Twitter servers will not be able to handle the traffic associated with the crisis. Imagine a year of the Fail Whale. (And no cheeseburgers, or any other kind of sustenance.)

This esoteric theory suggests Twitter will bring about the end of the world in a series of battles and disasters, all set to Wagner. The celebrities with the most followers will face off in a final battle to decide who will be our champion, and try to save the world. For some reason, the danger comes in the form of a world-eating snake. Unless Stephen Fry wins, I suspect this is the end for us all.

Icelandic artist, filmmaker, and musician Omar Hauksson presents a futuristic vision for us to revel in:

We here at Nakatomi only tolerate one kind of White Power- BETTY WHITE POWER! Betty White rules the atomic wasteland with an iron fist, making sure we’re all nice to our domestic pets. If you kick a dog, she will cut you man. Cut you quick.

You can get the print here.